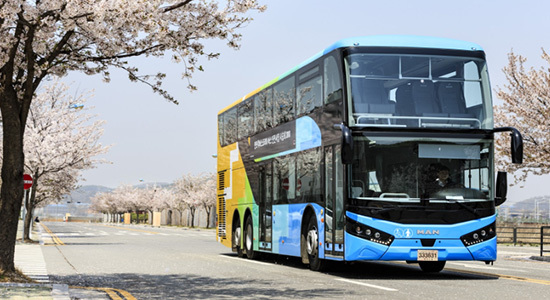 In Korea, there are now over 100 double-decker buses based on an MAN chassis in operation – to widespread acclaim from passengers who are appreciative of the city buses’ spacious design and comfortable interior fittings.

MAN Truck & Bus Korea delivered four buses to the Korean transport company Kyung Nam Bus at the start of autumn. “This means that there are now over 100 of the popular MAN double-decker buses in operation on the streets of Korea,” says Rudi Kuchta, Head of Product & Sales Bus as well as Speaker Business Unit Bus. He adds: “This is a huge success, especially given that we only introduced the MAN Lion’s City DD to the market here halfway through 2017.” Alongside the vehicles’ quality and reliability, the immense popularity stems mainly from their high capacity. Overcrowded buses are a part of daily life – especially during peak commute times. “Since the double-deckers were deployed, the situation has noticeably improved, and passengers arrive at their destination more safely and more comfortably.” It’s therefore no surprise that the buses are a huge hit amongst passengers, with many travelling exclusively on these vehicles. “The improved spaciousness and great view out of the second level have been well-received, as have the excellent interior fittings; for example a USB plug by every seat,” says Max Burger, Managing Director at MAN Truck & Bus Korea.

Kyung Nam Bus now operates a total of 37 MAN double-decker buses, which are mainly used by commuters. The vehicles travel between the city of Seoul and the outskirts of the South Korean capital. “Since part of their route covers the motorway where it is mandatory to wear a seatbelt, the double-deckers have been equipped like intercity buses.”

The MAN double-deckers (103 in total) operating on the streets of Korea are based on the MAN RR4 3-axle chassis, with a length of approximately 13 metres and a body originating from the Spanish body manufacturer UNVI. The buses are powered by the D26, a 460-hp (338 kW) 6-cylinder diesel engine which fully complies with the Euro 6 standard, as well as an MAN TipMatic 12-speed gearbox. The double-decker buses thus combine sustainable driving with power, excellent economy and utmost safety. Features including the electronic brake system (EBS), electronic stability program (ESP) and the Lane Guard System (LGS) ensure the safety of passengers and the driver.

Safety was also in the spotlight at the Safety Event which MAN Truck & Bus Korea organised in cooperation with MAN ProfiDrive last year, as the first manufacturer to do so in South Korea. Mandatory safety assistants including the LGS, ESP and the Emergency Brake System were introduced at the event; customers also had the option to test these out.

“We’re delighted to have reached the milestone of 100 double-decker buses based on the MAN chassis – it’s a clear indication of how happy passengers and transport companies are with the vehicles,” said Max Burger, Managing Director at MAN Truck & Bus Korea.