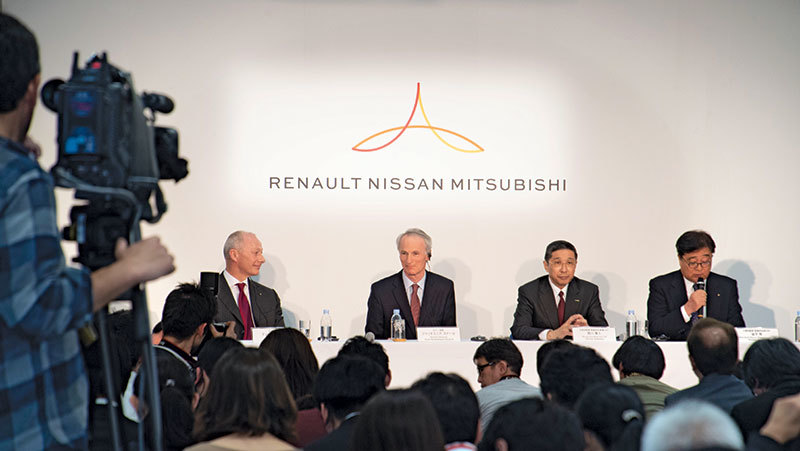 Jean-Dominique Senard will act as Chairman of this new operating board of the Alliance, with the CEOs of Nissan, Renault, and Mitsubishi Motors also joining the board.

The new Alliance operating board will drive the operational cooperation between Nissan, Renault and Mitsubishi Motors and look for new ways to generate value for its respective shareholders and employees.

In order to continue to strengthen the Alliance as well as lay the foundations of its future successes, Jean- Dominique Senard, Hiroto Saikawa, Thierry Bollore and Osamu Masuko are today announcing the intention to create an Alliance operating board for Nissan, Renault and Mitsubishi Motors.

The new Alliance Board will be the sole body overseeing the operations and governance in the Alliance among Renault, Nissan and Mitsubishi, in lieu of RNBV and NMBV. As such, it will be the face and primary driver of the Alliance’s “New Start”.

The definitive agreements will be signed in conjunction with the anniversary of the Alliance.

The MOU agreed by all three parties is attached.

The new board intends to meet every month in Paris or Tokyo and will regularly update stakeholders on its key value initiatives and achievements. The Alliance operating board will ask for the creation of specific projects to make recommendations for and drive the execution of new ways to create incremental value of the three auto companies.

As the 20th anniversary of the Alliance approaches, the boards of Nissan, Renault and Mitsubishi Motors would like to recognize the strong contribution the Alliance has made to the performance of all three companies, and their partners.

The creation of the new Alliance operating board is designed to help Nissan, Renault and Mitsubishi Motors become what they can be together - the top organization in the rapidly changing and highly competitive global auto market.

Through the commitment and loyalty of the employees of Nissan, Renault and Mitsubishi Motors, and a highly constructive cooperation with Daimler, the Alliance operating board will look to continue delivering total win-win for all those involved.