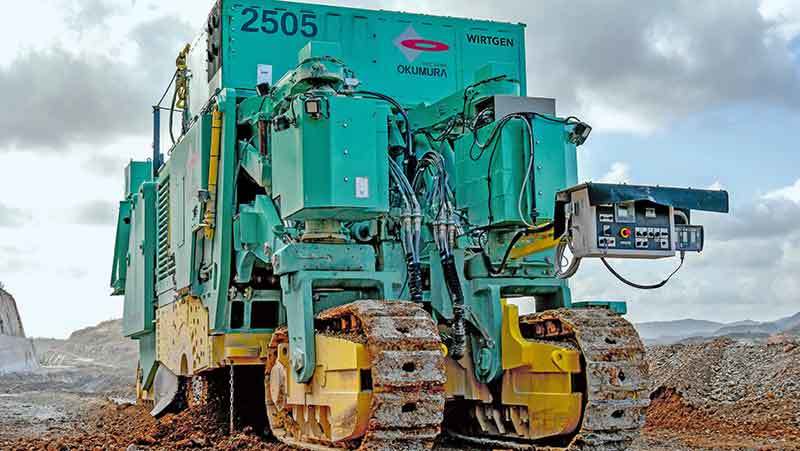 Wirtgen surface miners allow limestone to be mined in Ube Isa quarry in an environmentally friendly way that doesn’t affect the surrounding area.

Limestone has been mined from the Ube Isa quarry in Yamaguchi, Japan, since 1948. What makes this mine special, however, is that it is located in the immediate vicinity of a residential area – the nearest home is only 150 meters away. This is why Ube Industries, the owner of the quarry, hired Okumura Engineering Corporation to mine the limestone in an environmentally friendly way that wouldn’t affect the surrounding area. To achieve this, Okumura made the decision to use Wirtgen’s 2500 SM and 2500 SM Vario surface miners.

The Ube Isa quarry is located in Yamaguchi Prefecture, about 10 km from the world-famous Akiyoshidai Geopark. Ube Industries Ltd., which has owned the quarry since 1948, mines limestone here.

Over the years, however, conducting mining operations has became increasingly challenging for Ube Industries, Ltd, the owner of the mine. This is because the quarry is surrounded by a residential area, with the nearest homes only about 150 meters away. “The densely populated area around the quarry is a challenge, because environmental effects such as vibration and noise for local residents limit the size of the work zone” says Mr. Tomoyuki Shodai, General Manager of Mining Department at Ube Industries.

Due to the close proximity of the local residents, it has been impossible for the company to expand the open-cast mine any further in the past. The conventional blasting method is simply not an option here – it would cause too much vibration and the results would be too imprecise. In addition, it would be impossible to guarantee the safety of the surrounding population from flying stones. As a result, the company was faced with the prospect of never being able to fully exploit the open-cast deposit, which would mean a total loss of several million tons of limestone for Ube Industries. 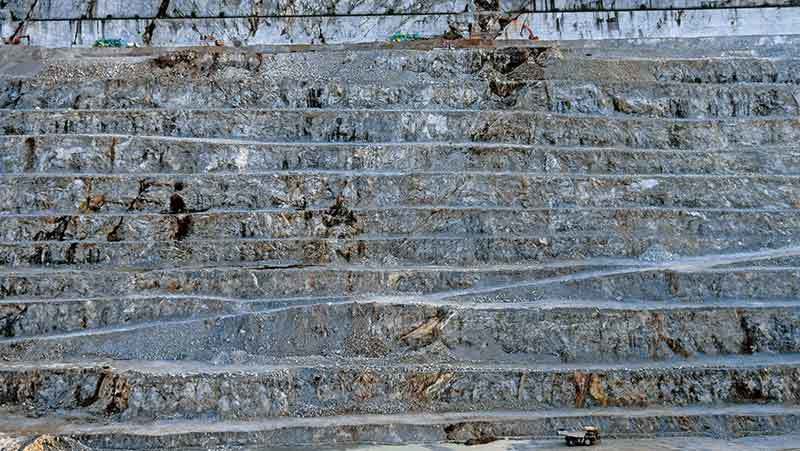 Surface miners can be used to cut significantly steeper mining walls (top of picture) than with the conventional blasting method (bottom of picture). This maximizes the use of the deposits.

Maximum Mine Exploitation Thanks to Wirtgen Surface Miners

But the solution to the problem was fairly obvious. Wirtgen surface miners can be used to extract minerals without the use of explosives. By cutting the ground to mine the materials, they simplify the complex extraction and preparation process. Mining, crushing, and depositing the material in windrows is all carried out in a single operation.

In addition, the surface miners are perfect for mining raw materials under difficult geological conditions and in tight spaces, as is the case with the Ube Isa quarry. This is why Ube Industries decided to hire Okumura Engineering Corporation to mine the outer walls of the quarry in 2012. Okumura has successfully used surface miners from Wirtgen GmbH to carry out routing work for many years. In addition to the 2500 SM surface miner that the company has used in Ube since 2012, in 2018 the service provider decided to add a second miner – the Wirtgen 2500 SM Vario.

The surface miners allow Okumura to create extremely stable and steep mining walls with narrow benches for Ube Industries, thus safely expanding the mining area. As a result, the open-cast deposit can be fully exploited. “Using Wirtgen surface miners allowed us to mine the southern side of the Maruyama region. That would have been impossible with the blasting method,” says Mr. Shodai. By now the quarry’s outer boundary wall have been gradually extended by 10 m in the direction of the residential area. According to Gaku Watanabe, general manager of Wirtgen Japan, this could increase the mine’s potential many times over. The Wirtgen Group’s Japanese sales and service company has been supporting Okumura since the beginning of the partnership. 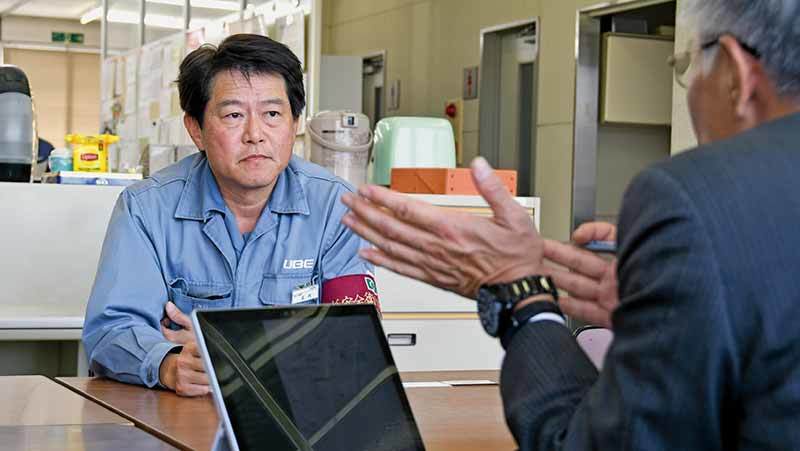 Mr. Tomoyuki Shodai, General Manager of Mining Department at Ube Industries, about the benefits of Wirtgen surface miners in the Ube Isa for his company.

The 2500 SM Vario is perfect for Environmentally Friendly Limestone Mining

Another advantage of surface mining is the central-drum concept. The cylindrical cutting drum is located close to the machine’s center of gravity, resulting in maximum cutting performance and exact cutting depths in hard rock. The result is an ideal, uniform material and a flat surface which, due to its stability, can easily be driven on by construction site vehicles.

In addition, Wirtgen surface miners are extremely environmentally friendly compared to conventional drilling and blasting methods. Vibration-free mining without drilling and blasting significantly reduces the amount of dust and noise produced. The 2500 SM Vario used in Ube was specially modified for the customer to meet these requirements. The sealed cutting drum housing as well as the specially equipped sound attenuation and dust separation filter additionally reduce dust and noise in the immediate vicinity of the residential area.

The Specialist for All Types of Hard Rock

The 2500 SM Vario is particularly suitable for hard rock, as is the case in Ube. Thanks to the central-drum concept, the drum is located very close to the center of gravity of the 135-ton machine, which allows it to penetrate into harder rock layers. The Vario miner gets its name from its variable control system. Its design allows the drum’s torque to be adapted to the properties of the rock. This prevents excessive wear on the bits, extending their service life. In addition, the Vario miner can be operated at different milling drum speeds, which makes it highly versatile when used in different external conditions. The machine’s direct drive makes it particularly efficient. And the turbo coupling mounted before the drive unit dampens vibrations, is extremely wear-resistant, and requires little maintenance. 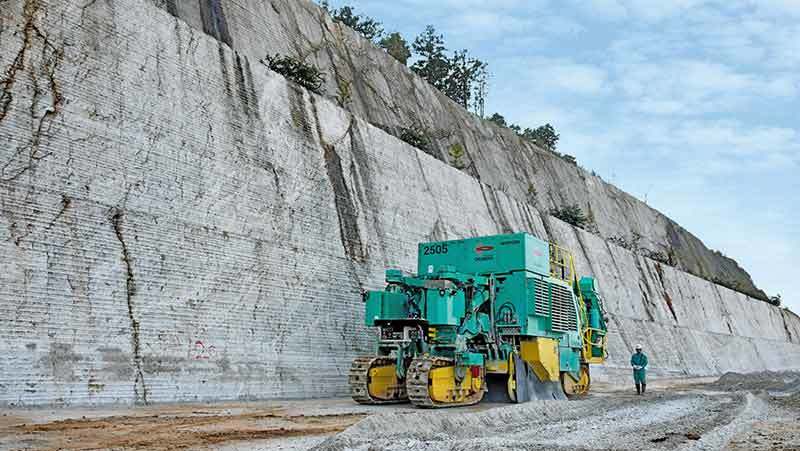 Using the remote control, the operator can easily operate the 2500 SM Vario from outside the machine, making the mining process much safer on steep slopes.

The 2500 SM Vario was also optimized for the quarry in Ube in terms of machine operator safety. Instead of controlling the miner from the cab on a steep slope, the operator can easily operate the machine with a remote control from outside the machine. This is a huge advantage, particularly on slopes as steep as 70°, as the machine operator is not only in a safer location but also has an even better view of the area being mined.

Okumura originally used standard picks with a shank diameter of 38 mm for their surface mining operations in Ube. Due to the very hard limestone with a compressive strength of 40 to 80 MPa, however, the picks suffered so much wear that they decided to use picks with a larger diameter shank. It goes without saying that Wirtgen offers the right solution for this as well. The picks with a diameter of 42 mm in combination with the HT15 tool-holder system are perfect for applications in hard rock and maximize pick utilization. The pick holder’s exchangeable base also dramatically reduces the holder’s changeover time and increases the availability of the machine for limestone mining operations.