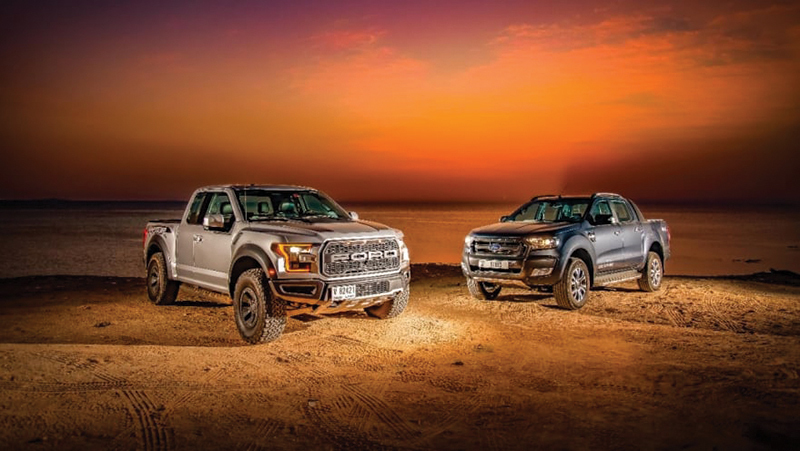 With the arrival of spring in the Middle East, there are just a handful of weekends left to enjoy the great outdoors before the weather drives many off-road enthusiasts indoors.

For the hardy few equipped to brave the rising temperatures in the Middle East’s warmer months, the Ford Ranger and F-150 provide the kind of rugged capability, dependable power and the ultimate flexibility you need to handle the toughest conditions you’re likely to encounter.

“Both the Ranger and the F-150 have been developed to cope with whatever you can throw at them,” said Andrew Gregory, brand marketing manager for F-150, Ford Middle East. “They both underwent extensive hot weather testing here during their development, and they’re both designed to get you anywhere you need to go.”

As the best-selling truck in the US for the last 42 consecutive years, F-150’s inherent toughness was underscored by its recent performance during tests conducted by the Insurance Institute for Highway Safety. Results showed that among all light-duty crew cab pickups measured in small overlap front crash testing for both driver and passenger, the 2019 Ford F-150 was the only truck to earn its top-tier good rating in all categories. Among 11 pickups, F-150 was also on top as the best performer in passenger-side small overlap front crash testing.

“But safety and toughness are just a part of the appeal of the F-150,” Gregory added. “We saw the passion owners have for their vehicles during a recent gathering in the UAE of owners from around the region. These are guys that get out and use their trucks every weekend – owners that think nothing of travelling 2000km to meet with each other and talk about trucks. That speaks volumes about the F-150’s appeal as a vehicle for exploring the great outdoors on weekends, and commuting long distances when needed.”

The mid-sized Ranger pickup is also enjoying widespread success with owners across the region. Engineered Built Ford Tough, ready for adventure and packed with driver-assist technologies to enable easier driving both on and off-road, the Ranger Wildtrak is anchored by a high-strength steel frame and powered by a 3.2-litre turbo diesel engine and a six-speed automatic. Four-wheel drive comes as standard, and the WildTrak also has low-range for extra off-road versatility.

Technology comes built-in, starting with an 8-inch touch screen and a dual LCD productivity screen for real-time vehicle, navigation, climate control and audio information. With the Ranger’s voice-activated SYNC 3® infotainment system, you can easily join a conference call about next week’s project, talk to your kids while you’re stuck in traffic or just browse your favourite playlist, all while never taking your hands off the wheel and your eyes off the road. SYNC 3 is also compatible with Apple CarPlay, mirroring Apple’s features on the eight-inch dash display.

Ranger’s muscular body features a high beltline, while a raked grille and windshield lend an athletic appearance and aid in aerodynamics and reduced wind noise. Short overhangs mean better approach and departure angles off-road and the Wildtrak features off-road-tuned suspension, all-terrain tyres, skid plates and a rear locking differential.  It also makes for a great piece of off-road gear, with a lockable roll-top cargo bed cover to seal away your valuables.

Backed by their Built Ford Tough credentials, the Ford F-150 and Ranger are equipped to take you anywhere you want to go. But, with the summer just a few weeks away, you’d best get out and enjoy the great outdoors before those temperatures begin to soar.