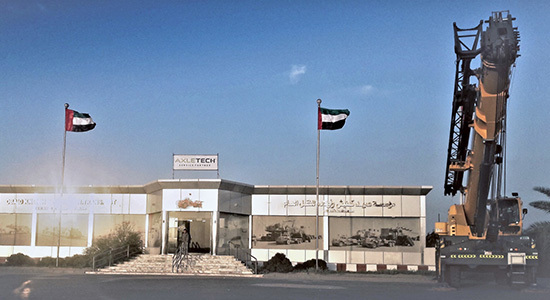 In August 2018, Obaid Kneish and Sons General Transport Establishment (Obaid Kneish and Sons), purchased its first Grove GRT8100 to work in the oil fields of the United Arab Emirates (UAE). The company was immediately impressed with the crane’s competitive load capacity, build quality and smooth operations, and has since added two more to its fleet.

Obaid Kneish and Sons is one of the first companies to take delivery of GRT8100 rough-terrain cranes manufactured at Manitowoc’s Niella Tanaro factory in Italy. In 2018, Manitowoc started producing the GRT8100 model at the factory to better serve customers in Europe, Africa, the Middle East and Asia Pacific. Previously, the cranes were built only at Manitowoc’s factory in Shady Grove, Pennsylvania, U.S.

“The GRT8100 offers really strong load capacity while delivering precise movements, which is a big advantage for us when the crane is handling expensive oil-drilling equipment,” said Butti Alhamly, owner, Obaid Kneish and Sons. “Reliability and consistent high performance are vital for us, especially as the cranes are working in the oil fields for the Abu Dhabi National Oil Company.”

The transportation company added its second GRT8100 crane in December 2018 and the third in June 2019. The three cranes are mainly used for moving rigs, lifting drilling equipment and coil tubing, with some applications requiring the cranes to hold suspended loads for up to a month.

The GRT8100 is a 100 t capacity crane with a 47 m, five-section main boom which provides better reach and greater versatility than other cranes in its class. The GRT8100 also features the Manitowoc Crane Control System (CCS) with its user-friendly interface, plus a tilting cab, impressive load charts and extensive component testing for better reliability.

George Azzi, general manager of Obaid Kneish and Sons, says operators appreciate the CCS, which allows them to adjust the controls and deploy outriggers using the same convenient dial.

“Operators like that they don’t have to reach up and use a touch screen each time. Plus, accessing all of the crane’s boom length configurations is very intuitive, too,” Azzi said.

In addition to the GRT8100’s strong load chart, Azzi appreciates the crane’s outriggers that can withstand the harsh environment of oil fields where temperatures can reach up to 60°C.

With a full complement of boom extension and insert options, the crane has best-in-class reach of up to 77 m. Both 10 m and 17 m manual and hydraulic offsettable extensions are available as well as a heavy-duty 3 m jib that is offsettable to 40 degrees.

Established in 1980, Abu-Dhabi-based Obaid Kneish and Sons is one of the largest transportation companies in the UAE specializing in equipment for oil field operations. The company purchased its three GRT8100 models from Kanoo Machinery, Manitowoc’s long-standing distribution partner in the Middle East.