Learning Together: Both Men and Women at King Abdullah University of Science and Technology Benefit from First Ever Co-Ed Driving Skills for Life in Saudi Arabia 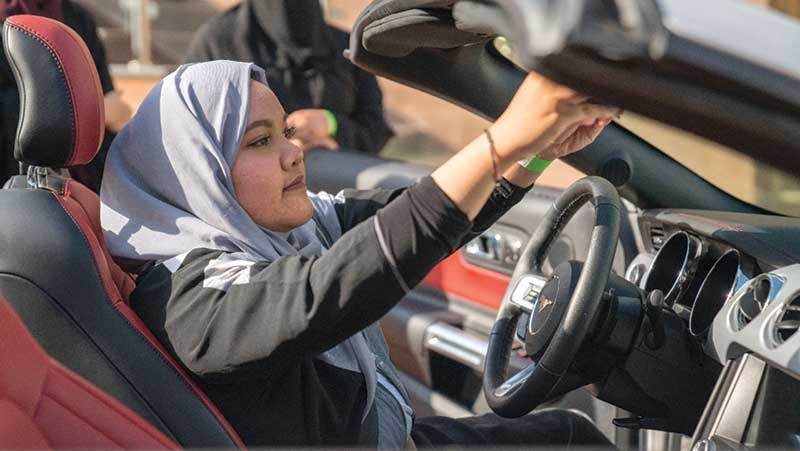 Ford’s Driving Skills for Life (DSFL) delivered another first for Saudi Arabia last week, when the award-winning safe driving programme visited the King Abdullah University of Science and Technology (KAUST) in Thuwal, to deliver the first ever programme for both the men and women on campus.

In partnership with the Ford Motor Company Fund, the university hosted DSFL, addressing newly-licensed male drivers, whilst also hosting Ford’s unique DSFL for Her, created for women embarking on their first journey behind the wheel in the Kingdom.

Ford also reintroduced training for nighttime driving into the programme at KAUST, in which nearly 150 students and faculty members participated. Driving conditions are remarkably different and often notoriously difficult at night, when vision is reduced, hindering an ability to spot hazards, junctions, pedestrians, cyclists and motorcyclists.

Crucially, Ford’s Driving Skills for Life programme also focuses heavily on distracted and impaired driving. According to Saudi Standards, Metrology and Quality Organisation (SASO), more than 160,000* crashes in Saudi Arabia are caused by mobile phone use behind the wheel.

In efforts to further empower women, Ford Motor Company and Jeddah-based Effat University last year launched a special variation of Ford’s globally renowned and award-winning safe driving programme, Ford DSFL for Her. The programme was specially designed to accommodate Saudi female students embarking on their journey to acquire a driver’s licence, and, by the end of 2018, had trained more than 200 Saudi women.

Confirming an on-going and growing commitment to the region, and to newly-licensed female drivers in Saudi, Ford intends to offer a greater number of DSFL for Her sessions, with varying levels of driving ability and experiences, around the Kingdom.

A signature programme of the Ford Fund, Driving Skills for Life is an international initiative for road safety created in cooperation with the Governors Highway Safety Association and a panel of safety experts. It captures newly-licensed drivers’ interest with free, hands-on courses that pair new drivers with professional instructors to focus on the issues and obstacles that cause crashes, including impaired and distracted driving.

Now in its 16th year, Ford Driving Skills for Life has provided free real-world driver training in vehicles, or through its online academy, to more than one million newly-licensed drivers - including more than 4,000 students across the Middle East since 2013 - in more than 40 countries. In total, Ford has invested more than $50 million in initiatives globally as part of its long-standing commitment to promoting safety on the road.