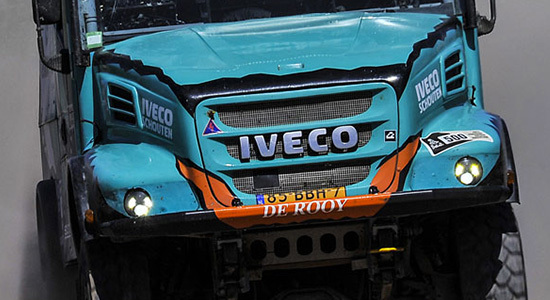 PETRONAS Team De Rooy IVECO will compete in the 42nd edition of the Dakar Rally with three IVECO Powerstar trucks, which will be driven by Janus van Kasteren jr, Vick Versteijnen and Albert Llovera, and an IVECO Trakker with Michiel Beckx behind the wheel.

Gerard de Rooy will not participate in this year's race due to recurring back problems, but will be in Saudi Arabia to support the team.

Preparations are underway for the Dakar 2020, the world's most extreme rally raid, which will take place for the first time in Saudi Arabia. It will be a new start also for PETRONAS Team De Rooy IVECO, which will be aiming for the podium with four motivated drivers new to the team.

PETRONAS Team De Rooy IVECO will tackle the extreme terrains of the race on board three IVECO Powerstar and a Trakker. For the ninth consecutive year, IVECO will be the official supplier of the team and provide them with vehicles, engines and spare parts. All the IVECO trucks feature IVECO Cursor 13 engines with up to 1000 hp of power specially engineered by FPT Industrial – CNH Industrial's powertrain brand.

For the 42nd edition, the Dakar rally race leaves the South American continent and moves to the Middle East, where it will be run in the grandiose and varied landscapes of Saudi Arabia. The route will cover 7,500 km, of which 5,000 in special stages. The desert is king in this year's rally raid, accounting for 75% of the route which will put all the pilots' driving and navigation skills to the test, driving on all types of sandy conditions.

Thomas Hilse, IVECO Brand President, stated: "The IVECO team cannot wait to start at the Dakar rally, which is held the first time ever in Saudi-Arabia. Our trucks will once again show cast their extreme reliability on the toughest terrains, including many challenging conditions in the desert. We are clearly aiming for the podium driven by the performance of our strong powertrains engineered by FPT Industrial. This year, we are proud to present an entirely new team of pilots who impressed us with their great enthusiasm and team spirit. And they can count on the support and mentorship of Gerard de Rooy. I promise you will admire the team's determination in taking on this new challenge to push themselves to the limit – Unstoppable, like IVECO."

Janus van Kasteren jr is an off-road driver, and will be competing in the Dakar rally for the third time behind the wheel of an IVECO Powerstar Evo 3 (vehicle #505) with navigator Marcel Snijders and mechanic Darek Rodewald. He will aim to capitalise on the experience he gained in particular in the previous editions, where he achieved several finishes in the top 10.

Albert Llovera, a former Olympic skier, has been competing in rallies in cars in spite of becoming paralyzed from the waist down. He debuted in the Dakar rally in 2014 and has participated in four editions of the race since then. He will be competing behind the wheel of the second IVECO Powerstar Evo 3 (#517), which has been adapted for him. Also on board will be navigator Ferran Marco Alcayna and mechanic Marc Torres.

Vick Versteijnen has gained experience driving trucks in two editions of the Dakar rally, having made his debut in this race in 2015, when he surprised observers by reaching the finish line in spite of severe setbacks on his vehicle. He has also participated in the Morocco Desert Challenge in 2018 and 2019. He will be competing on an IVECO Powerstar Evo 2 (#522) with navigator Teun van Dal and mechanic André van der Sande.

Michiel Becx will be participating in the Dakar Rally for the first time on a truck, and will be providing fast assistance to the team and carry extra parts on the IVECO Trakker (#531) with the most experience mechanic in the team, Bernard den Kinderen, and navigator Edwin Kuijipers.