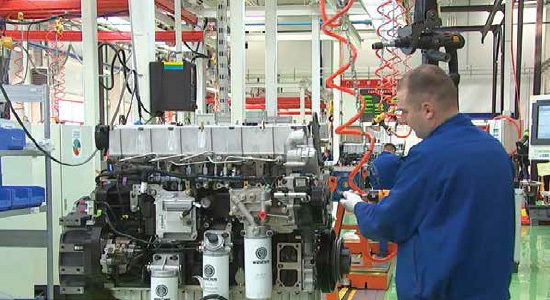 MAZ and Weichai launched a diesel engine plant. The company is located in the industrial park "Great Stone" and will be able to produce up to 20 thousand engines per year.

The engines will be produced by the joint venture MAZ-Weichai. The total investment in the plant construction is about $20 million. The joint venture acts as a resident of the park and can enjoy its benefits and preferences.

Before the ceremony, the Deputy Governor of Shandong Province Lin Wen and the Deputy Prime Minister of the Republic of Belarus Igor Lyashenko held a meeting at JSC MAZ – the managing company of BELAUTOMAZ holding. Here the plans for further bilateral cooperation including the development of the service and specialists training on the basis of the joint scientific and technical center were announced. The opening of the center took place a day earlier at the Minsk Automobile College.

The plant covers 3.5 hectares. Engines with capacity from 130 to 700 “horses” for trucks, buses and special vehicles will be produced here. All motors belong to the ecological classes Euro-5 and Euro-6. They will be assembled from small aggregates, thus increasing the level of production localization. The plant is capable to produce 10 thousand engines a year at one shift working mode, with a two-shift mode the production will be increased twice. A test run of production took place at the plant last November. Since then, more than 780 engines have been assembled. Another 500 motors will be produced by the end of the year.

Most of the engines will be used in the assembly of MAZ vehicles, but about a third of the products can be exported to the CIS countries and far abroad. All MAZ service stations in Russia, Ukraine and Belarus are ready to provide their warranty and post-warranty service. The Belarusian trucks have been already equipped with Weichai engines before and they showed good results during the tests.

“The launch of a new engine plant is of great importance for the Belarusian automobile industry. Now MAZ will be able to produce its own diesel engines, which will increase production efficiency and show a positive effect on the cost of vehicles. It should be noted that the partnership with Weichai is not limited in investments: Chinese partners also bring here the latest technologies. These engines will show their best in terms of price and quality ratio in the CIS countries.” noted at MAZ.

The proposal to build a motor plant in Belarus was first discussed in 2016 during the visit of the President of Belarus to China. Then a memorandum of cooperation was signed. The project has been approved and supported by the Chairman of the PRC Xi Jingling.

At the same time, a plant for the production of mechanical gearboxes is being built in the Great Stone Park. Its owner is the ‘’Fast-MAZ’’ joint venture, created by MAZ in cooperation with the Chinese company Shaanxi Fast Gear - the Weichai subsidiary company. The plant will be built by the end of 2020. It is planned to assemble 10 thousand gearboxes annually under ‘’Fast MAZ’’ brand.