Juffali Starts Production Of The All ...

With a number of new machine launches in the past 12 months – including the latest generation 100 horsepower R-Series B730 backhoe loader – Bobcat’s range of compact construction equipment has never been larger, says Gaby Rhayem, Bobcat’s Regional Director for the Middle East and Africa. 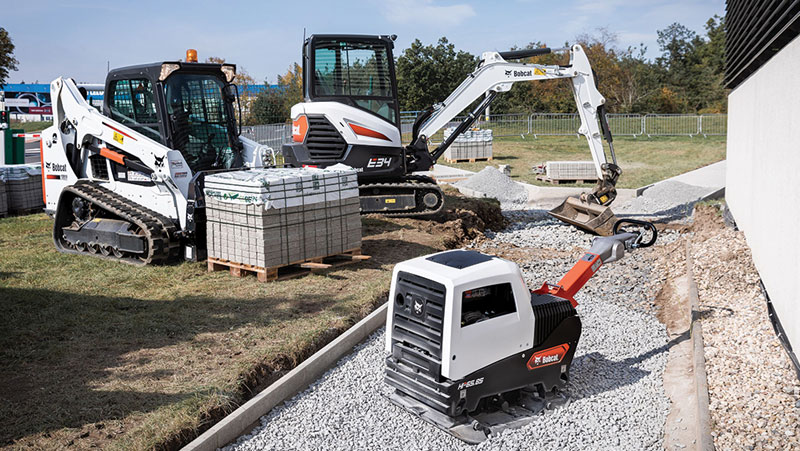 Bobcat’s launch calendar has been extraordinarily busy over the past 12 months, including an all-new backhoe loader, rotary telehandlers and compaction equipment. In all, it has launched more than 48 new machines under the ‘Next is Now’ banner.

Yet coupled with excitement around the new kit has been disappointment that customers and dealers haven’t been able to attend launches in person and get acquainted with the machines first hand.

There have been widely viewed online launches, and customers have also been able to experience the machines through walk-around videos and video calls with dealers. But it’s seeing machines being put through their paces by skilled operators on a testing ground – such as the one at Bobcat’s site at Dobříš, in the Czech Republic – or getting hands-on and driving the machine themselves that can can give customers extra appreciation for a machine’s productivity, its nuances and key features.

For Gaby Rhayem, Regional Director for Middle East and Africa at Doosan Bobcat EMEA, virtual events also lack the all-important personal elements that are part and parcel of business in the Middle East and Africa. Customers from these regions are also especially eager to see, touch and experience machines firsthand he says: “Here in the Middle East the overall relationship – talking about the weather, family, their work, and then talking about the machine – is especially important. Unfortunately, we have missed this in a year when we have completely changed our product line and launched so many products.”

Best known for its skid steer loaders, telehandlers and mini-excavators, Bobcat has been on a mission to grow its range of compact equipment, to become a one-stop shop for contractors and municipalities. If there are gaps in the machines available, it can mean the brand misses out on business in a case where a customer wants to source all their machines in a single contract from one supplier.

Meanwhile there are also cost benefits for contractors when using a large fleet of Bobcat machines, including cross-functionality of attachments across equipment including loaders, backhoes and telehandlers.

Currently Bobcat has strong market share across key segments, such as skid steer and tracked loaders, mini excavators and telehandlers – proof that its machines are popular with fleet managers and operators alike. It enjoys particular success with its compact excavators, including the 3.7 tonne E37, which hits a sweet spot in terms of weight class requirements in the Middle East, says Rhayem. 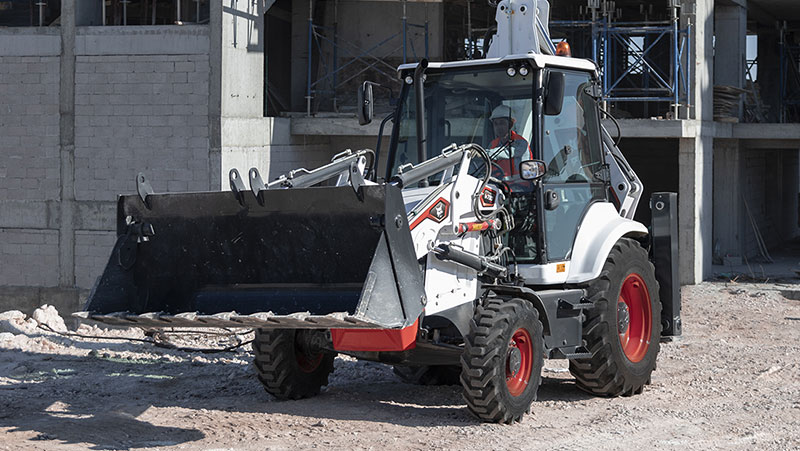 When it comes to the new launches, the all-important machine for the Middle East and Africa is the backhoe loader. Bobcat first launched a range of BHLs in 2016, allowing it to contest the segment. Since then it has done quite well in terms of market share, says Rhayem, but he believes the new machine – the R-series B730, which replaces the first generation B700, B730 and B750 models – will prove even more popular. Headline features include a best-in-class Perkins 100 horsepower (74.6 kW) engine with a maximum torque of 408 Nm, manual or (optional) auto-shift transmission, and best-inclass reach and wide working areas at both the front and rear. There is also a new roomy 6-pillar cab with excellent all-round visibility with an enlarged rear sliding window and angled, flat-glass side windows.

A new feature for the R-series BHL is that the operator can choose between ISO, SAE or Cross (X) backhoe controls, while the customer can build their preferred control pattern or change to pilot controls with a selectable control pattern. That was one piece of important feedback from customers from the first generation BHLs – that drivers want to be able to operate the machine with the control configuration they are most comfortable with, allowing them to achieve maximum productivity from day one, notes Rhayem.

“Now we have a very beautiful new generation of backhoe loader it puts us ahead in terms of design and driver experience – we have one of the most spacious cabs,” he says. “And you can really feel the 100 horsepower engine – drivers say that it’s as if the machine has no limit, you can push and push it to the maximum.”

Bobcat also launched a new generation of rotary telehandlers, with four machines for MEA (and other regions with similar engine requirements), that have lifting heights from 18 to 25 m and lifting capacities from 4 to 6 tonnes. Often called 3-in-1 machines, rotary telehandlers combine the attributes of a telehandler with those of an aerial working platform and a crane, and are mainly used in construction and industrial maintenance. That multi-functionality means the rotary telehander range should be well-utilised in the region, says Rhayem.

Another machine of note for the MEA markets is the L23, a small articulated loader. With a 25 horsepower engine, it’s ideal for applications requiring small machines such as municipal gardens, while it can use the same attachments as the S450 skid steer loader. Bobcat also launched new compact wheel loaders, but for now these will only be sold in higher emission standard markets in Europe.

And the list goes on. In a new business area for the brand, Bobcat has also launched a comprehensive offering of light compaction tools. Developed in cooperation with the well-known Ammann Group, the range comprises seven different product families and will ultimately offer 37 models, from vibratory rammers weighing 29 kg up to 2.6 tonne tandem rollers.

It includes two dual drum walk behind rollers, which can be used for compacting bituminous material but also for light earthwork and other compaction tasks, and which have an integrated water sprinkler system as standard and dual amplitude setting to switch between soil/gravel and asphalt/ bituminous compaction modes. Two trench rollers are on offer – one articulated and one skid-steered. There are also five articulated ride-on tandem rollers, from 1.2t up to 2.6t.

The light tool line-up includes six vibratory rammers (from 29 to 89 kg), with reduced vibration handle and a state-of-theart CAD calculated weight distribution; six different vibratory forward plates, ranging from 54 to 115 kg; 12 reversible vibratory plates, which operate with a twin-shaft system, enabling change of direction during compaction and a better compaction force; and four hydrostatic plates, weighing between 450 and 582 kg. 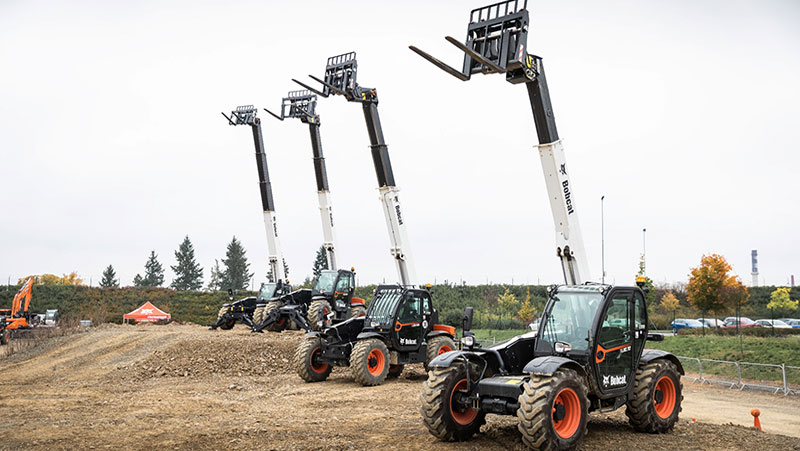 Bobcat is looking to ramp up production of key models this year to meet demand.

‘The confidence is back’

Reflecting on a turbulent 12 months for the business, Rhayem notes that the company was able to essentially maintain production continuously at its two main production facilities serving the EMEA markets, at Dobříš where it produces loaders and mini excavators, and Pontchâteau, in France, where it manufacturers telescopic loaders and handlers. Maintaining production at a time when others were idle, even allowed them to increase their market share in countries.

In the Middle East they retained virtually their full time, while they are reinforcing its footprint in Africa, especially Central and Sub-Saharan Africa. They have also re-entered markets including Libya and Yemen.

While there was a collapse in demand associated with lockdowns in the second quarter of 2020, in the second half of last year they saw a strong pick up in key markets in the Middle East, including Saudi Arabia, and acceleration of demand in many countries in Africa.

Now some countries in the Middle East are almost back to a normal situation, including the UAE, whereas some countries are still affected by Covid-19, such as Oman and Kuwait. “Overall the situation in the Middle East is coming back to normal. Confidence is back. Business is back. We as a supplier are struggling now – logistics, including a lack of containers, rising steel prices – all of this has made things more difficult,” says Rhayem. Lead times have increased on popular models, but they are expecting to catch up with demand by June, with increased output from their factories.

2021 will be better than 2020 believes Rhayem – in part because of the requirement to complete projects connected with major events such as Expo 2020 in Dubai and the FIFA World Cup in Qatar meaning increased pace of work. “Overall we are on a positive trend from an industry point of view.” They have also completed big deals in Egypt with municipalities and governments, due to a push in the country to develop small towns around the country, something which requires a large amount of compact equipment. “In one deal alone we sold a significant number of mini excavators, on top of many skid steers and telehandlers, so Egypt has been the cherry on the cake.”

Reflecting on the value of Bobcat, Rhayem says that the market recognition of the quality of their equipment is demonstrated by strong resale values. At a recent used equipment auction in Abu Dhabi, Rhayem witnessed Bobcat skid steers from 2008 selling for $8,000 – representing almost 40% of the price of the new machine, and a 2004 skid steer selling for $6,750. Meanwhile, comparable machines from competitors sold for less.

“It’s really amazing for machines that are 12-15 years old to be sold at this price. And it shows how Bobcat really has a very good reputation in the market. This is where we are very strong,” concludes Rhayem.