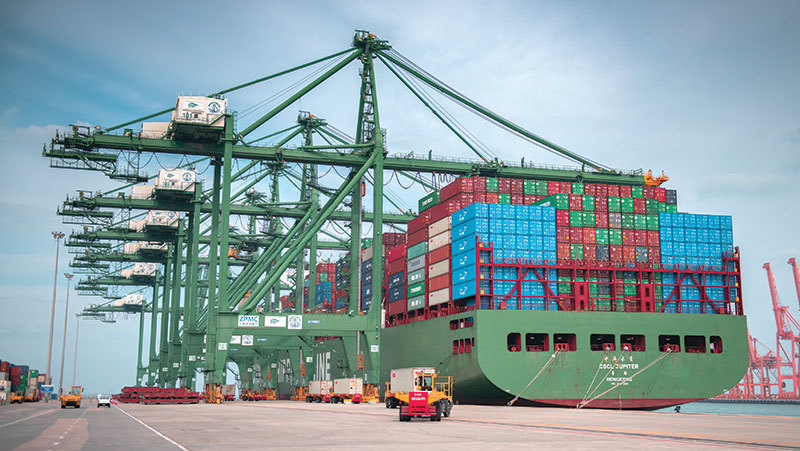 King Abdulaziz Port, the largest Saudi port on the Arabian Gulf, marks its successful story which dates back to over four decades ago. The comprehensive port is pioneering major industrial and economic developments. It has expanded from a small berth capable of accommodating only two ships and connected to a 13-kilometre monorail off the coast of Dammam, to a huge complex of ports, shipyards and warehouses. It is also a base for an integrated infrastructure of factories and facilities for various maritime and marine activities, just one kilometre from the heart of Dammam.

Commenting on King Abdulaziz Port’s journey of growth and development, Eng. Walid F. Al Faris, Director General of King Abdulaziz Port, said, "Operations at King Abdulaziz Port have started four decades ago mainly to serve the oil and gas industry, which flourishes in the Eastern Province. However, the Kingdom’s leadership had a vision to make it a comprehensive centre for the maritime industry, and this is exactly what has been achieved. The port has seen regular expansions and today, it covers approximately 190 square kilometres and is connected to the heart of Dammam, which is one kilometer away. The port is the integrated commercial window that connects the Kingdom to the world and its location on the Arabian Gulf makes it ideal for exporting goods to neighbouring markets in Asia and the Indian Subcontinent. Additionally, the port’s central position on the Arabian Gulf coastline makes it a preferred destination for international shipping lines carrying goods to the Kingdom; the biggest market in the GCC.”

Talking about the integrated capabilities of King Abdulaziz Port, Al Faris explained, “King Abdulaziz Port can handle any type of cargo with its unique capabilities that are rarely found in a single port. It has four terminals operated by the best port management and operation companies. These include two container terminals; the first, operated by the International Port Services Company, has a capacity of 2.5 million containers TEU's and a 16 metre deep with 10 berths totalling 2,160 metres in length.  It is equipped with 17 bridge cranes, 5 of them are fully operated remotely. The second terminal, operated by the Saudi Global Ports Company, and has a capacity of 1.5 million containers TEU's, with two berths totalling 700 metres in length and a 16.5 metre deep. It is equipped with 6 bridge cranes and has an additional 600,000 square metre area. The terminals are supported by a large number of mobile stackers and container cranes.”

Al Faris added, "The port also has a general and bulk cargo terminal in the eastern part, operated by Globe Marine Services Company. It includes 9 berths totalling 1,740 metres in length and 12 to 14 metre deep. It features 56,000 square metre covered warehouses and 342,000 square metre open storage areas. The central cargo terminal, operated by United Technical Co., Ltd, includes 13 berths with length 2,465 meters, and 9 to 14 meter deep, 44,800 square metre covered warehouses, and 372,000 square metre open storage areas. Both terminals have a lot of cargo handling equipment. Therefore, the port is an ideal destination for huge vessels that can dock on the port’s various deep berths. Waiting time for ships to unload is minimal thanks to the quality infrastructure, modern handling equipment and the ability to store bulk and general cargo in covered warehouses to protect them from weather and damage.”

The port’s diversification strategy aims at enhancing its capabilities to deal with various types of cargo, including grains, oils, foodstuffs, ro-ro goods such as cars, vehicles, and other types of containers, is key to its competitiveness. The port further promotes this position by providing services to ships such as fueling, food and other supply services. 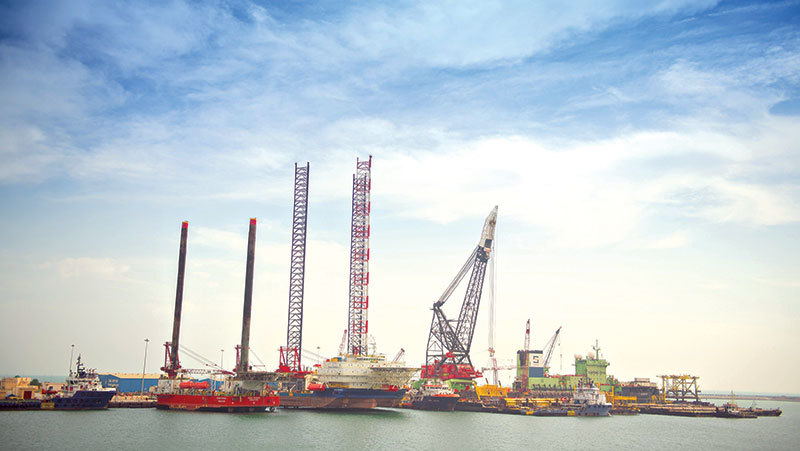 Talking about the port’s import and export capabilities and supporting an alternative economy, Al Faris clarified, "King Abdulaziz Port has a state-of-the-art infrastructure that helps the Saudi industrial and commercial sectors do business easily. The port has a 351,000 square metre storage and re-export area, including 22 thermal-insulated warehouses, six of them are air-conditioned. The port also has an inspection warehouse and two container-unloading warehouses. Saudi factories rely heavily on the port's capabilities to export its products to international markets. The port is indeed a key partner in supporting alternative economy sectors.

What makes the port ideal in its operations is its connection to a network of modern highways linking it to all cities of the Eastern Province. As well as, it is also linked by the railway that connects directly to the Dry Port in Riyadh, the economic and industrial heart of Saudi Arabia. King Abdulaziz Port is the preferred choice for factories and companies in cross-border trade which contributes to building the kingdom's economy as one of the world's top economies.

The Saudi Ports Authority is committed to streamlining cargo handling procedures. It takes just 24 hours to clear a container, making the port a hub for the world’s biggest logistics companies. Ship operators at King Abdul Aziz Port also like the seamless procedures for landing of their seafarers and crews, and the ability to visit the city and enjoy its leisure facilities and tourist attractions.

King Abdulaziz Port is not just cranes and quays for loading and unloading. The port includes some of the best marine manufacturing facilities in the Arabian Gulf region. Explaining the port’s manufacturing capabilities, Al Faris said, "The port houses King Fahd complex for repairing ships, operated by Al Balaghah Holding Group. It consists of two floating docks for repairing ships and offshore rigs over an area of 147,000 square metres. It also houses a marine construction and repair complex, managed and operated by Zamil Offshore Services Company. 70 vessels were built in this shipyard and over 360 marine pieces of different sizes and types were repaired or maintained, including huge offshore rigs. Thus, the port is a comprehensive one-stop shop for ships where they can confidently set off to anywhere in the world assured of the proficient services they received.”

In addition to the port’s capabilities in ship building and repairing, as well as floating docks, it features a 500,000 square metre area for manufacturing and assembling of offshore platforms and oil drilling rigs, managed and operated by Saipem Taqa Al Rushaid Fabricators (STAR). The area specialises in manufacturing and assembling of offshore rigs and industrial equipment that support the oil and gas sectors. A total of 72 offshore rigs have been built there for Saudi Aramco and neighbouring countries. The area also houses specialised welding and paint workshops.

The port provides office spaces for logistics and maritime and ship management companies. The facilities are equipped with high-speed internet service and provides easy access to electricity and water services that meet the needs of companies, including those with major industrial facilities. 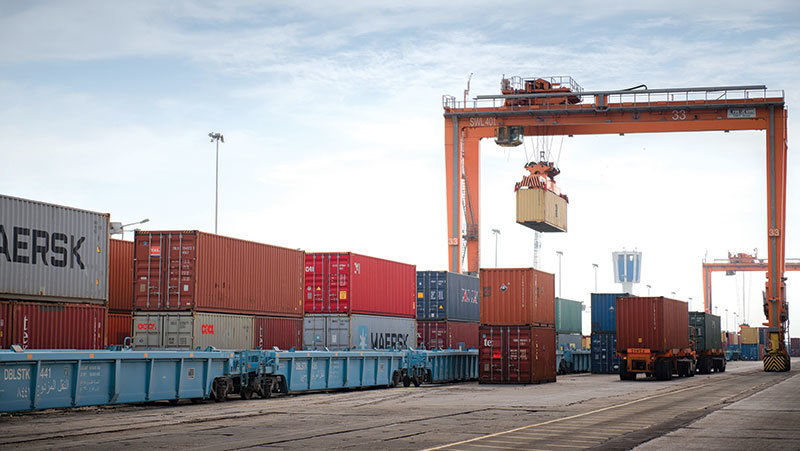 Commenting on the importance of training and Saudis in the maritime sector, Al Faris highlighted, “The Kingdom should take the lead in the logistics sector within Vision 2030. To ensure this is achieved, we must have qualified Saudi professionals capable of managing and operating all the port’s facilities. That’s why, we have established a maritime training academy at the port and have contracted with one of the world's leading marine-training organisations.  We are now preparing to graduate over 90 marine supervisors. We also train port personnel on operating cranes, facility management and handling the advanced smart infrastructure that makes the port a model for quality and operations.”

“We are proud that we have zero pollution cases in the port thanks to the efficiency of the team and the quality expertise of the port’s staff,” added Al Faris.

Recently, King Abdulaziz Port received the International Quality Management Award (IQM) in the diamond category from Business Initiative Directions (BID). IQM is one of the most prestigious quality management awards in the world. BID developed the QC100 total quality management model in collaboration with several engineers and experts in mathematics and economics. This resulted in many of the most comprehensive and effective quality management tools used today. Since its establishment in 1986 in the USA and Spain, BID’s main task has been to recognise, educate and promote a culture of quality among international organisations. Each year, it organises seven quality management conferences in major cities in Europe and the United States.

Receiving such international recognition contributes to promoting the name and reputation of Saudi ports, regionally and globally. This has a positive impact on the Kingdom's progress in the Global Competitiveness Index and Report and the Logistics Performance Index, and is reflected on the Kingdom’s global position as a distinguished logistics hub in the centre of three continents; contributing to Kingdom of Saudi Arabia’s Vision 2030. 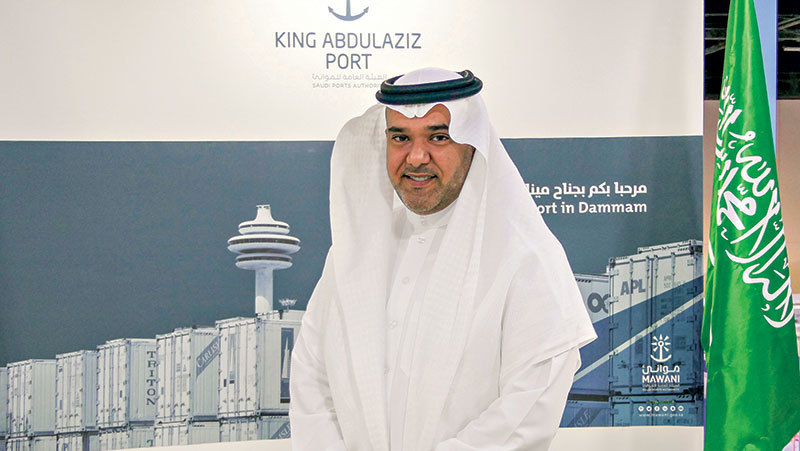